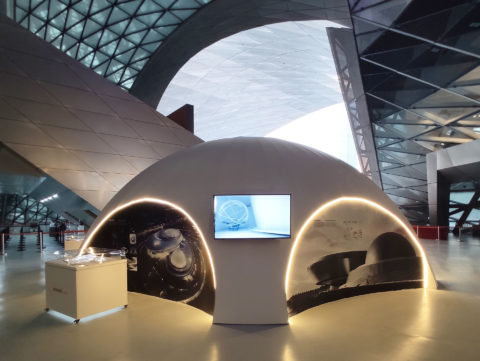 Ennead Architects participates in the Bi-City Biennale of Urbanism\Architecture (UABB) in Shenzhen with an immersive installation “Tech-Firmament”. The biennale explores new phenomena brought about by the digital revolution as it relates to urbanization. It will be on view until March 2020 at the Shenzhen Museum of Contemporary Art and Urban Planning (MOCAUP).

As Ennead's first experimental work, Tech-Firmament engages visitors with a series of visual experiences that illuminate humanity’s position on a rapidly changing and imperiled planet.

The experiential space draws inspiration from one of Ennead’s most anticipated new projects, the Shanghai Astronomy Museum, scheduled to open in 2021. Tech-Firmament continues the architectural language of the Shanghai Astronomy Museum, which invokes the experience of orbital motion. The installation is a semi-spherical form with a domed screen and stepped seating within. Through an immersive video projection, visitors are led across the universe to see the visceral power of the natural world, and hopefully, rethink the relationship between humans and our shared environment. Tech-Firmament is also meant to be a public space within the biennale, where people can come together and share design ideas about the ways we might better care for our cities and our planet.

Ennead Design Partner Thomas Wong, designer of the forthcoming Shanghai Astronomy Museum, spoke at UABB’s academic forum, “The New Public Space”. His lecture,“Public Space as a Social Barometer”addressed the re-positioning of public space in contemporary society and the impacts and possibilities brought about by technological advancements. Wong asked, “What should the future of public space be?” He stressed the importance of designing public space that provides places of dialogue and discourse, where people can gather to confront the many urgent, defining issues of our future.